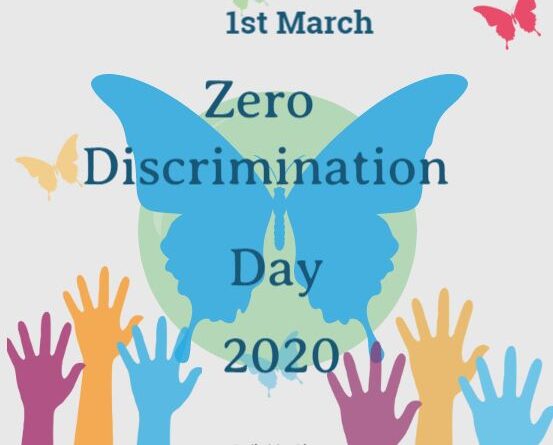 “Never doubt that a small group of thoughtful, committed citizens can change the world; indeed, it’s the only thing that ever has.”

The Joint United Nations Programme on HIV and AIDS (UNAIDS) began celebrating Zero Discrimination Day in 2014 as an effort to ensure that no person is discriminated against based on their origin, race, gender, nationality, age, disability or social orientation. It was of great importance to the organization especially since it holds the mandate to eradicate the stigma that HIV/AIDS affected people endure in society.

The symbol of the day is of a butterfly, used to help promote the #zerodiscrimination message. The butterfly represents transformation and encourages people to share their stories and experience with discrimination.

UNAIDS’ vision is to have zero new infection rates but this dream is a near-impossibility when dealing with discrimination against the affected/infected. So how does discrimination look like? When a person is denied opportunities in education, employment, healthcare and other services due to their gender/race/sexuality/HIV & AIDS status, that is discrimination. It is immoral, dehumanizing, hurtful and against the law yet the practice persists in today’s world. Statistics released by UNESCO in September 2019 shows that in Sub-Saharan there is a higher rate of girls who are out of school (33.6%) than boys (28.9%). Cases of killing of albinos, ethnic clashes, lack of employment for the youth, little or no development in marginalized areas are examples of discriminatory practices on specific groups of people.

Since 2014, the day has been celebrated with various running themes, including “Stand Out For Zero Discrimination” in 2016 and “What If…” in 2018, whereby UNAIDS was tasking people to ask themselves whether they were taking part in any form of discrimination in their lives and what they were doing about it. In 2019, the theme for Zero Discrimination Day was “Act to Change Laws That Discriminate”. In many countries, laws result in people being treated differently and/or excluded from certain essential services simply for who are. States hold a moral and legal obligation to ensure that discriminatory laws do not deny their citizens fundamental freedoms, and to enact legal frameworks to grant them their basic human rights.

The 2020 theme for Zero Discrimination Day is to challenge the discrimination faced by women and girls with an aim to raise awareness and mobilize action to promote equality and empowerment for them. Granted, some countries have made great headway in equalizing gender rights but most still have a long way to go. In Kenya, for example, child marriages, female genital mutilation, unequal employment opportunities and rising femicide cases are but a few of the discrimination practices that women and girls still endure in this day and age.

Discrimination can happen anywhere: at work, at home, at school and the community at large, ergo, it doesn’t only affect individuals and groups of people, it affects everybody. It is our collective responsibility to speak up when something is wrong, raise awareness on discrimination, support the affected (and infected, in the case of HIV/AIDS) and promote the benefits of diversity. Let us work together in creating a global movement of solidarity to end all forms of discrimination.